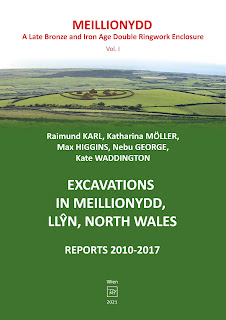 The site reports volume for the Meillionydd excavations 2010-2017, containing the 2012 GPR survey report, all stratigraphic reports of all 8 seasons, the finds register and short discussions of significant finds, the sample register and detailed feature plans of the main features excavated. 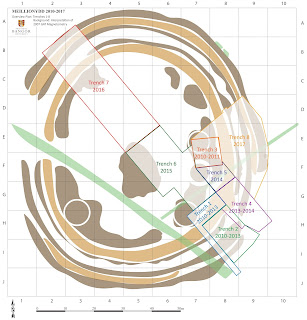 From 2010-2017, the authors excavated the Late Bronze and Iron Age double ringwork enclosure at Meillionydd on the Llŷn peninsula in North Wales. Over the course of 8 seasons, a total of c. 2200 m2 were excavated, which corresponds to roughly 1/3rd of the inner area of the enclosure. Excavations at first concentrated on the entrance area into the double ringwork, located in the south-eastern side of the enclosure, but were extended later to provide a full cross-section of the site.

This volume mainly presents the raw data on the stratigraphy, as recorded in each season's site stratigraphic report, together with the results of a GPR survey conducted on site in 2012 by Archaeo Prospections (ZAMG). In addition, the most significant finds and detailed feature plans are included in this volume (as well as the full finds and sample lists), to allow interested parties to dig into the data themselves. With 197 illustrations, it also provides rich visual information on the excavations and its finds.

Raimund Karl is Emeritus Professor of Archaeology and Heritage at Bangor University, UK, and Privatdozent for Celtic Archaeology at the University of Vienna, Austria. He has been leading the Meillionydd excavation project through all its 8 seasons as one of the co-directors of the fieldwork and lead researcher. He has published numerous articles on the excavations and their interpretation.

Katharina Möller is a Research Associate and PhD student at Bangor University and co-directed the Meillionydd excavation project from 2014-2017 as well as being a researcher involved in the post-excavation work. She has published several articles on the excavations, their interpretation, and the community archaeology projects conducted at the site over all 8 of its seasons.

Max Higgins is logistics supervisor at Wessex Archaeology and has been co-directing the Meillionydd excavation project in the 2014 and 2015 seasons. He has published a short monograph on the results of the geophysical surveys carried out at Meillionydd and has written several popular articles about his experiences on the site and the results of the excavations there.

Nebu George is a PhD student at Bangor University and co-directed the Meillionydd fieldwork project in 2016 and 2017, as well as being involved as a researcher with some of the post-excavation analysis of data collected during the excavations. He has written several articles about the geochemical analyses he has carried out at Meillionydd (and other sites in North Wales and beyond), with his forthcoming PhD thesis providing further detailed analysis of the data he collected and its usefulness for archaeological research.

Produced for ArchaeoPublica, the Kompetenzpass-Reihe is a means to record archaeological skills acquired by practice (whether by students during an archaeology degree, by professional archaeologists as CPD, or by hobby archaeologists).

The German version of BAJR 's Archaeology Skills Passport , translated into and adapted for the German archaeology sector by Katharin...

Our printed books are available through our Print On Demand service partner, neopubli GmbH, Berlin, Germany.